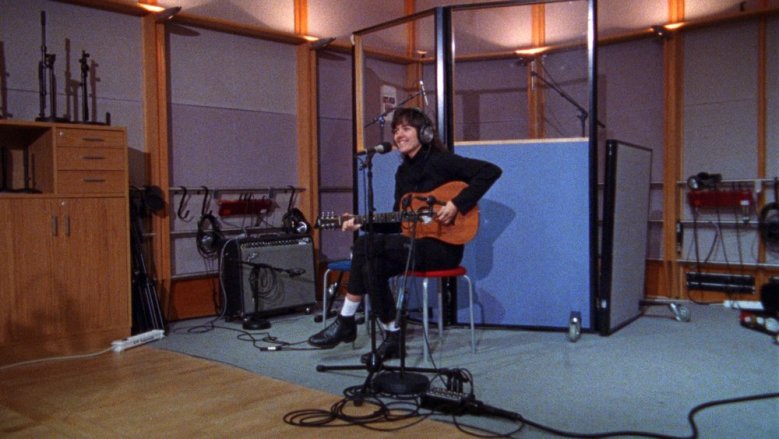 The raw, textured feel of Danny Cohen’s intimate film is a wonderful match for its captivating subject matter.

Courtney Barnett stands alone in the middle of a recording studio in Oslo. A dressing room in Bloomington. A roof in Berlin. On stage, the Australian singer-songwriter commands attention, her propulsive energy and raucous croon enlivening everyone in the room as she bares her soul with songs like “I’m Not Your Mother, I ‘m Not Your Bitch”. It’s those moments in between, however, that speak to Barnett’s authentic nature – a shy and often sad human being who lives a solitary life and struggles to open up in anything other than his words.

All of these qualities and more are captured on gripping 16mm in “Anonymous Club,” the feature debut of music video director Danny Cohen. A frequent collaborator with Barnett, Cohen developed a friendship with the singer that inspired him to try his hand at documentary filmmaking. Knowing her reluctance as an interview subject, Cohen asked her to speak her mind into a dictaphone over a three-year period, much of which was spent touring internationally. The film places these mundane and profound, yet still sincere, stream-of-consciousness half-thoughts on footage of the singer on the road and on stage, at home in Melbourne and in hotel rooms around the world. , adding up to a unique and vivid image of Barnett’s inner and outer worlds.

The instantaneous pace of Cohen’s film is less about backstory and more about trying to capture Barnett’s changing moods at this point in his life. While Barnett is an internationally acclaimed and Grammy-nominated artist, she secretly simmers in self-doubt, as she reveals on tape, constantly questioning herself and her work. She languidly ruminates on the purpose of her music and the entertainment industry in general, taking her time trying to put her ambivalent thoughts into words.

As for live performances, she says, “Some days it can be so liberating, electric, energetic and lively.” While others, “I feel like I’m part of this scripted performance…and it just feels really unnecessary.” Meanwhile, when a crowd is low on energy, she wonders if everyone “thinks I’m a big joke and no talent.”

These deeply personal observations end up sounding like acts of generosity, much like Barnett’s music. It’s as if she’s reaching out to viewers and listeners alike, reassuring them that as she sings along to the nifty track “Hopefulessness,” “Your vulnerability / is stronger than it looks.” You know it’s okay / to have a bad day. Barnett is, like most of us, a bundle of conflicting emotions and impulses, at one time drained of inspiration and excitement for the future, at another full of life and creative energy. But her attitude through it all makes her an infinitely pleasing subject to watch – indulgent yet always self-aware and quietly curious, her smile and bright green eyes are ever-present as she makes her way through worldwide.

The film, drawing inspiration from Barnett’s relaxed pacing, also takes its time, lingering long enough on quiet moments for us to feel connected to them before taking us to another location. Cohen’s decision to shoot with a 16mm camera (specifically customized to sync sound) lends these moments an even greater intimacy. At one point, Barnett is sitting in a hotel room in an unnamed town, strumming her guitar in a blue kimono. Pale lilac furniture and curtains give the scene a washed out, hazy feel, as she almost whispers the lyrics she’s working on in the studio.

Any other method might have seemed harsh and overbearing, but 16mm gives each sequence a warm, inviting glow, capturing the soft hues of each frame with a sense of emotional honesty. The film’s unpolished, textured feel also feels like a good match for Barnett, whose voice, slightly gravelly with a soft Australian accent, is reminiscent of Lucinda Williams’ heartfelt, ravaged sound (unsurprisingly, one of Barnett’s favourites).

Barnett makes the decision to stage his first solo tour without his backing band, in order to reinvent his music, hear the songs in a new way, and ultimately understand them differently. It feels like a risky move on the part of a musician plagued by “crippling self-doubt and a general lack of confidence” to steal the title of one of her songs. As she nervously prepares for her first tour stop in Bloomington, Indiana, she wonders if anyone really wants to hear her perform.

At this point in the film, Barnett speaks directly to Cohen behind the camera, delivering his thoughts in real time. “I mean everyone bought a ticket, right,” Cohen says. “Yeah,” Barnett replies. “Unless they have a free ticket,” she laughs, before listing reasons why people might not want to be there, including being “re-offered” someone’s rejected Christmas present. ‘un or have “hated” a place.

But as she takes the stage and begins to perform, all nerves seem to dissipate. “We love you Courtney!” resounds from the audience. ” I love you too ! she said back. It opens with Hank Williams’ “I’m So Lonesome I Could Cry,” a devastating track on its own, but one that carries added weight after witnessing Barnett’s struggle with insecurity during the first half of the film. Her voice rises, crumbles and wavers in a moment of piercing and admirable vulnerability on stage.

At her next stop, she opens up to Cohen. “I went from kind of a great darkness to this pretty open optimism.” Performing solo and connecting with the anonymous crowd through his music seems to have helped solidify his goal – “to give someone in the audience the energy and the power to feel something”.

“Anonymous Club” is undoubtedly a movie Barnett fans will love – but if you’re not familiar with his music, or maybe not so passionate about it, you might end up becoming a fan. Or at least a fan of Cohen, who through his sensitive lens reminds us that the music of the best singer-songwriters is inspired by their own feelings – of joy or sadness, love or loneliness – and can transcend the boundaries between the crowd and the person who sings it. Sometimes it can even help us feel less alone.

Oscilloscope will release “Anonymous Club” in theaters on Friday, July 15.

Register: Stay up to date with the latest film and TV news! Sign up for our email newsletters here.

Hits & Misses: A HIT after the Thursday evening market