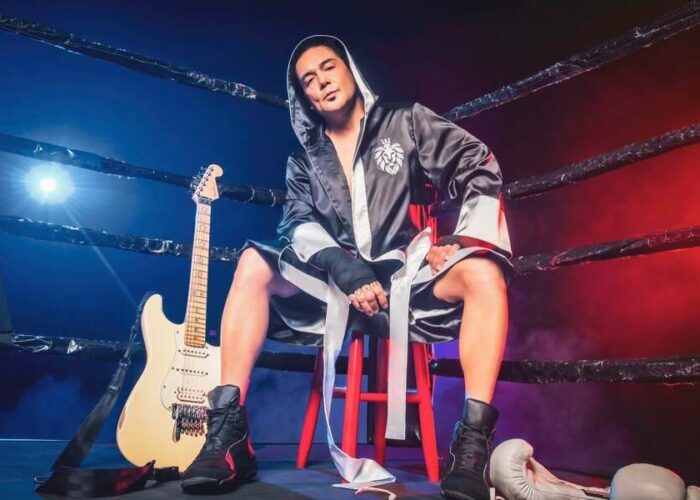 Chris Perez jumps into the boxing ring in the music video for his song “Pushing Ahead.”

The San Antonio guitarist and songwriter released “Pushing Ahead” this month, the first song to feature him on lead vocals. It’s a jangly rock tune in English that’s perfectly in tune with the long-haired persona he’s cultivated over the past few years.

POP TO RAP TO MARIACHI: Listen to these 12 Latin acts to celebrate Hispanic Heritage Month

Perez was motivated, like so many others, during the COVID-19 lockdown. Stuck at home, he wondered if he would ever return to a recording studio or play live shows.

“I figured if it ever got better, got back to normal a bit, then I wouldn’t be such a quick ‘no’ at a lot of things,” Perez said.

“The words and the melody just started coming. I didn’t think – and that was part of the freedom there was – that I was going to sing it. I’m just writing another song,” he says.

Fan reaction has been overwhelmingly positive and has created anticipation for the music video, which will premiere Friday noon. It features another new side to Perez, who was married to Tejano singer Selena. In the clip, he takes center ring as a boxer and does a few rounds with San Antonio’s Daniel “Da Beast” Baiz, who joked on Instagram that he can now “say I lost a fight to Chris Perez”.

“He’s a killer in the ring,” Perez says. “The guy could break me in half if he really hits me. But even her soft cuts on the top and her bangs to the body, I was like, “Ugh,” trying to play with it. It hurts, man.

Perez says it was just as difficult when it was his turn to throw a few punches.

“I almost had a stomach ache. I never punched anyone in the face. The feeling, even if you’re wearing gloves, you feel the flesh on the other end, and it moves, and you feel the bone forehead. I had to apologize after every punch,” he said.

Perez deliberately dropped the song first to get people used to the idea of ​​him fronting. It was released through Malaspalabras Records, a new label founded by comedian George Lopez and Santana singer Andy Vargas.

He is even more nervous for the first video.

“When I first saw the video, I freaked out. It’s not my favorite. I’m not like, ‘Hey, look at me, center stage.’ People look at you in a different way than if you’re right next door playing guitar. They’re looking at you, man,” he laughs.

Perez quickly learned to enlarge his moves and take up more space. He drew inspiration from 80s hair metal icons Poison and Bon Jovi, even channeling a kind of alter ego.

‘Pushing Ahead’ by Chris Perez in video preview

Come back Friday noon on this article to see Chris Perez’s “Pushing Ahead” clip. The Chris Perez Band will perform the song for the first time on Sunday at the State Fair of Texas in Dallas.

Perhaps more importantly, we see a fun side to Perez. He shares it with “hip-hop crooner Tejano” Zeus. El Mero Necio and dresses up as an Elvis Presley impersonator. It’s a pivotal moment for one who for too long has been viewed by many from one angle.

“It’s like most of the time, some people look at me like I have some kind of sad energy. When they think about my past, and they see me, they think the worst. I was like that, also with myself, and it showed on my face. But now it’s mostly all the good things, the music and what Selena stands for,” he says.

“I’m not just this one-dimensional dude because I’m judged by my past. I’m very proud of that, and I have a lot of love for her family and of course for her and I see how much Selena is still doing. I am so happy to be attached to it as I am now. There was a time when being attached to it was depressing because I couldn’t move on. Over time, that started to change, and I’m happy about that.

“It’s the whole other thing about ‘Pushing Ahead.’ Do I accept it, or do I keep doing what I’m doing, because the only way it’s gonna change is if you do something else Now I’m excited about it I want to see that part of me grow.

Weyes Blood Haunts With Twisted New 'It's Not Just Me, It's Everyone' Video