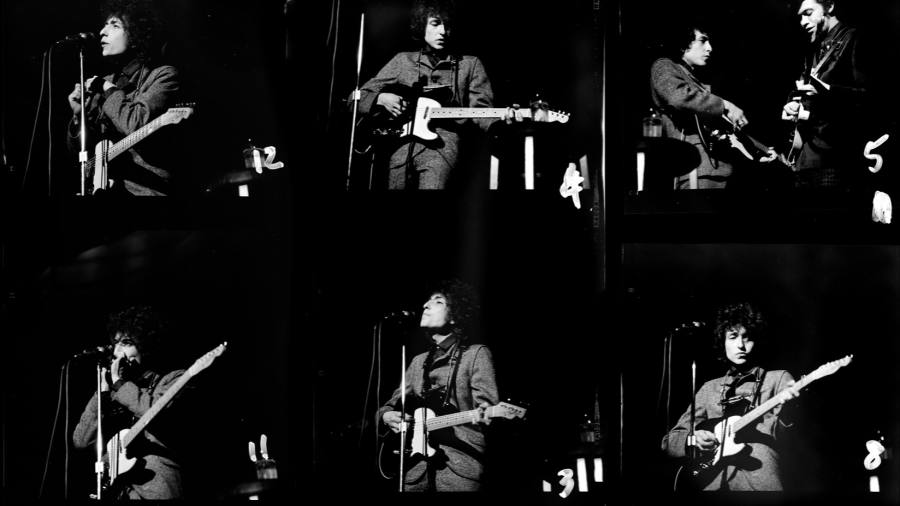 When Bob Dylan publishes his superb memoirs Chronicles: Volume 1 in 2004, he left open the tantalizing promise of a sequel. But volume 2 is not out yet. Instead, the Winner of the 2016 Nobel Prize in Literature has been busy with a different book, which he’s apparently been working on since 2010. It’s The Philosophy of Modern Songa beautiful, heavy-titled compendium in which the most important singer-songwriter in the history of recorded music turns his attention to songs by other artists, such as a Dylanesque version of Sun Tzu The art of War.

There are 66 in total, each with its own chapter. Dylan writes about them in seemingly dotted shards of prose that are optimistically labeled “essays” by the dust jacket blurb. There is no explanation why he chose these particular songs, or what their shared philosophy might be. The 66 discs symbolize a Highway 66 of mainly American popular music on which we jump, bounce and swerve in a clunker mounted at breakneck speed and quite a bit of eccentricity by our author. The format recalls Dylan’s turn as a talkative disc jockey on his Theme Time Radio Hour radio show series in the 2000s, whose producer is hailed in the acknowledgments.

The choice of songs is expert: I enjoyed listening to them while reading the book. Reflecting the musical direction of his recent albums, they are drawn primarily from a pre-British Invasion repertoire of country music, orchestral pop, rock ‘n’ roll, doo-wop, blues and R&B. The first recording is a cracking bluegrass relic from 1924, Uncle Dave Macon’s “Keep My Skillet Good and Greasy,” which Dylan portrays as a proleptic explosion of rock ‘n’ roll.

Current acts are conspicuously absent. Other notables from the 1960s are also overlooked: The Who’s “My Generation” is the only classic from that era to be included. Dylan ignores its most striking feature â€“ the stuttering voice, a lexical battering ram against the established order of things â€“ and talks about generational ingratitude instead.

His tone is variously pleasant, hep, harsh, folksy, grumpy and insightful. Absurd truisms are coined (“As the old saying goes, an iceberg moves gracefully because most of it is below the surface”). Aphorisms are coined (“Art is disagreement. Money is agreement”). Jokes are thrown in, like this amusing description of outlaw country singer Johnny Paycheck: “Like many little men, he was tighter than the inside of a golf ball and hit about as often.”

Freewheeling glosses are given to song lyrics, tinged with surrealism. “You’re pretty sure you’ve become some kind of biological mutation, you’re no longer a mere mortal”: this is Dylan’s messy take on Domenico Modugno’s pop-operatic ditty “Volare,” the Italian entry in the 1958 Eurovision Song Contest. Some songs are commented on in more detail, others are dispatched in just a few sentences. The Drifters’ single “Saturday Night at the Movies” elicits such powerful feelings for Old Hollywood that the song itself goes unmentioned.

That life was better in the old days is a repeatedly strummed chord. The chapter on Sonny Burgess’ heartbreaking 1950s rock ‘n’ roller “Feel So Good” ends with Dylan giving Donald Trump’s Maga catchphrase a jitterbug somersault: “It’s the sound that made the ‘Great America.’ Its nostalgia is reinforced by dozens of wittily chosen archival photos, which stylishly complement the abbreviated passages of the text.

He has an incisive ability to get inside a song and make its workings understandable to those of us who haven’t, like him, composed over 600 of them.

Chronicles showed how great Dylan can write about music. Although not always trustworthy as an autobiography, it was revealing in that regard. His generosity in thinking about other people’s songs has a double-edged quality, in that he was often accused of getting away with melodies and phrases for his own use.

But he has an incisive ability to get inside a song and make its workings understandable to those of us who, like him, haven’t composed more than 600. “Take two people – the one studies contrapuntal music theory, the other cries when she hears a sad song,” he wrote when discussing Santana’s “Black Magic Woman.” “Which of the two really understands music better?”

The most generous moment of The Philosophy of Modern Song comes when he writes on a song called “Doesn’t Hurt Anymore” by Native American musician and activist John Trudell, whose family was killed in a suspected arson in 1979. “Take a moment – read a little more about John Trudell than is offered here,” Dylan writes. But there is a pronounced streak of lack of generosity in the book, and even cruelty.

Only four singers appear among the 66 acts. Women appear mainly in The Philosophy of Modern Song as magnetic objects of attention in songs sung by men. They fill its pages like a pulp-fiction list of â€œvamps, â€œhellcatsâ€ and â€œfoxy harlotsâ€.

Sexism is exaggerated to comic absurdity, like the “thousands” of serpentine women a delirious Dylan describes dancing at Grateful Dead concerts: “Floating freely, snaking and sliding like a typical daydream .” But the imagery turns to outright misogyny in the chapter on The Eagles’ “Witchy Woman,” when the singer who dismissed Sigmund Freud as one of “enemies of humanity” on his latest album Rough and rowdy ways is overwhelmed by a Freudian terror of the dentate vagina.

Johnnie Taylor’s R&B number “Cheaper to Keep Her” sets off a goofy rant about divorce lawyers, which ends with Dylan advocating polygamy and evoking a bizarre view of “women’s rights crusaders and freedom lobbyists.” women ‘knocking’ the man on his heels until he’s pinned behind the eight ball dodging shrapnel from the shattered glass ceiling’ A joke comes out of the metaphorical wreckage; Dylan has fun playing grumpy, but humor has a sour taste.

The book’s decidedly masculine slant shows a disregard for what Dylan sees as modern-era milquetoast sensibilities. â€œThese people lack imagination and are going to throw the baby out with the bathwater,â€ he comments, referring to those who denounce old films for â€œa two-minute sequence that changing times have rendered politically incorrect”. The stance is designed to provoke, but it also traps Dylan in a dead end of contrarianism and iconoclasm. Amid the entertaining sallies and insightful remarks is a growing sense of meanness and pettiness. There are more things in modern songs – women’s voices, for example – than we dream of in The Philosophy of Modern Song.