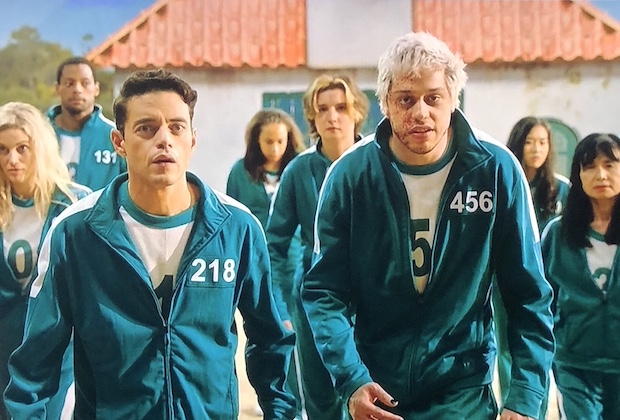 It took a few weeks, but NBC Saturday Night Live this weekend got his take on pop culture success Squid game – watching Korean drama Netflix through the lens of a country music video.

Pete Davidson and guest host Rami Malek led the shipment, appearing at first as good old boys humming about rusty Chevrolets, lost dogs, and hateful exes. What to do when you are dealing with such a sad fate in life? â€œI guess I have to play the Gaaaame Squid,â€ they sang.

From there the two were transported from the countryside to the Squid game barracks, where the lyrics said they “had a number, not a real naaaame”, and where they were watched over by guards whose masks were adorned with the same “symbols as a PlayStation” (as well as a host who looked like to “Doctor Perte”).

Also featured in the parody of the clip were versions of the Mad-Eyed Gangster and Moll characters from Squid game, as Davidson and Malek characters first sailed the super-lethal “Red Light, Green Light” playground, followed by the “Glass Stepping Stones” ride.

At one point, Malek’s character looked at the â€œpiggy bank in the skyâ€ and remarked (as we all did) in song, â€œForty-five billion won / that’s a lot of moneyâ€¦. At least I think it’s / I’m confused by the currencyyy.

The parody cap was a good spur on what the (ill-advised) winning gamer did with their earned windfall.

What did you think about SNLis expected Squid game? (We’ll add the video once it’s available.) Was it on par with TVLine featured last week, a version where Chad Davidson’s character is not disturbed by bodies falling around him?

Rate Malek’s episode via the following poll, then leave a comment with your review.